Scientists have shown that some supplementary feeds ferment differently in the rumen and reduce methane per unit of feed intake, while others have a lower nitrogen concentration meaning less nitrogen is excreted onto pastures and nitrous oxide emissions are reduced.

Two supplementary feeds already in use in New Zealand have been shown to reduce the amount of methane produced per unit of feed consumed: forage rape and fodder beet.

Forage rape, when fed as a sole feed, has been found to consistently reduce methane emissions by around 30%. However, in some circumstances (for example, wet soil conditions) feeding forage rape can increase nitrous oxide emissions. Work is ongoing to better quantify the net benefits of feeding forage rape. Fodder beet, however, is only effective at very high rates of inclusion (>75%), which makes it unsuitable as a methane mitigation option for the majority of New Zealand’s pasture-based systems.

Some New Zealand dairy farms use considerable quantities of purchased feeds and reduced emissions of nitrous oxide can result if these feeds are high in energy and low in nitrogen.

Maize and fodder beet both have lower nitrogen concentrations than the standard grass/clover diet. Increasing the proportion of these feeds in the diet lowers total dietary nitrogen concentration, resulting in lower nitrogen excretion and reduce nitrous oxide emissions. However, in the case of maize, this effect may be partly offset because the energy content of maize silage can be lower than that of fresh grass/clover pasture. As a result, the amount of dry matter consumed to reach a given level of production could increase, which would in turn increase methane emissions.

Similar trade-offs mean that feeding pasture hay and silage have very little effect on total emissions. They have slightly lower nitrogen content but also lower available energy, which results in roughly the same net emissions if total production is maintained. 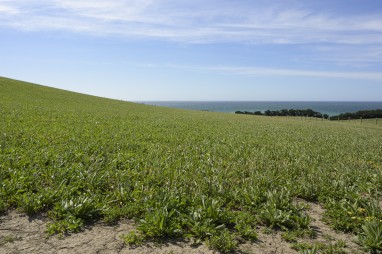 Plantain is generating substantial interest. As well as reducing nitrogen in urine, Plantain appears to create soil conditions that reduce the microbial activity that creates nitrous oxide. However, to achieve the desired result, it appears a significant proportion of pasture (possibly up to 30%) would need to be planted in Plantain. Research to confirm that figure is continuing. Research is also ongoing to confirm how to best incorporate and manage Plantain within the farming system.

How will this affect my GHG number?

Although fodder beet and forage rape can bring about substantial reductions in methane emissions when fed as sole feeds, when assessed on an annual basis, they don't make up a large proportion of the diet. National methane reductions are therefore likely to be small, although they could be more substantial for individual farmers. Work is currently underway to better quantify the net effect of these alternative feeds under different management, soil and environmental conditions. To find out more about your greenhouse gas number, see the Know your number page.

The emissions reductions arising from the use of low-nitrogen feeds (for example, maize, fodder beet) will depend on the amount eaten and the reduction in nitrogen content, and any associated changes in methane emissions due to changes in the energy content relative to that of pasture. Again, nationally reductions are likely to be modest, but the use of low-nitrogen feeds can have strong benefits for individual farmers.

Perhaps the biggest risk is trade-offs between different greenhouse gases. For example, feeding forage rape might reduce methane emissions but this benefit might disappear if nitrous oxide emissions increase. Similarly, using low nitrogen feeds will be of little benefit if methane emissions increase. Although initial results with Plantain are promising, it's likely to be challenging on-farm to maintain the amount needed in the diet to bring about the reductions in both nitrous oxide emissions and nitrogen leaching recorded under experimental conditions.

For more on research into plantain and other low-nitrogen crops, see: