Modelling studies suggest it might be possible to reduce total greenhouse gas emissions by up to 10% on some farms, by further fine-tuning production systems so the same output is obtained from fewer animals.

Methane and nitrous oxide emissions are strongly related to the quantity of feed eaten. However, it's possible to produce the same amount of milk or meat from a farm with different amounts of feed being eaten. 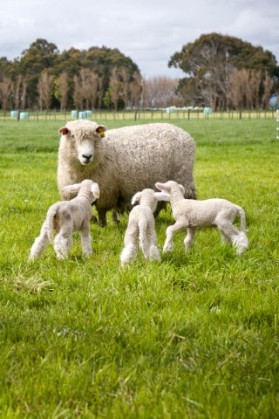 Quite simply, if less feed is eaten, less methane is belched into the atmosphere. Less nitrogen is consumed and returned to the soil in urine and dung, meaning less nitrogen is available to be converted by microbes into nitrous oxide.

This isn't a new idea. New Zealand farmers have been improving individual animal performance for decades. New Zealand sheep farmers produce roughly the same amount of lamb now as they did 30 years ago, but with roughly 25 million fewer ewes as the lambing percentage has increased and lamb carcases have become heavier. As a result, methane emissions from the sheep sector have dropped significantly. Although, nationally, emissions from dairy cows have gone up, they haven't risen in proportion to the increase in dairy cow numbers and total milk produced; emissions per kg of milk solids have been going down by around 1% per year as individual cows become more productive.

How to implement this action

There’s no one-size fits all route, but it starts by examining your current system and testing whether this approach could work for you.

Can you look to further increase individual animal performance but drop stocking rate such that output and profit are maintained? This may be via the use of better genetics, re-examining supplementary feeding and re-visiting fertiliser practices.

How will this affect my GHG number?

Modelling by the Biological Emissions Reference Group estimates that a combination of lower stocking rates and improved individual animal performance can, in some circumstances, reduce emissions by up to 10%, maintain product output and improve profits.

As with any approach to reducing emissions, it's critical to start by finding out what your greenhouse gas emissions are and how any changes to your current system will affect these numbers.

This approach relies on balancing reductions in stocking rate with increases in individual animal performance, to maintain product output.

The biggest risk is that stocking rates are reduced but there's no increase in individual animal performance, resulting in a drop in emissions and profits. Grassland management is particularly important as high stocking rates help maintain pasture quality; if grassland quality goes down as a result of lower stocking rates it will be very difficult to increase animal performance. If supplementary feeds are used, care will need to be taken to ensure feeding practices are adjusted to meet the needs of higher-performing stock.

For more on improving reproductive performance and removing non-productive animals in the dairy sector, see the DairyNZ website.