The Subtils farm with passion and precision at Omarama Station in the foothills of the Southern Alps. They put their livestock and their environment first – two things valued highly by the companies they supply to. Knowing their greenhouse gas numbers is becoming an important part of that.

Learn how the Subtils approach greenhouse gas management on their high-country station.

I met Richard when I was doing my O.E. in the U.K. I ran out of immigration time in the UK, so I had to come back to New Zealand and Richard came back with me.

He ran out of immigration time in New Zealand after a year. So, we decided that we would meet somewhere neutral.

We ended up in Dubai, in the Middle East for a couple of years, got engaged and married while we were living in Dubai. And then went from Dubai to Malaysia.

And then the opportunity came up for us to come back to Omarama.

It was quite a shock to the system coming from a small farm in crowded south-east of England to a big block like this in the middle of relatively nowhere.

The fact that out-the-back is 1500 metres plus. And the extremes of the summer and winter, that was a hell of a culture shock.

The largest block is 2000 hectares up at about 1550 metres, and that gets used for the summer grazing. So that's at one extreme.

And then we've got 560 hectares of center pivot irrigation and that runs at about 22-23 stock units per hectare and is extremely intensive. So at the moment, this time of year in the spring, all our lambs are out there being fattened.

Shearing - that's the big part of our harvest if you like. And we'll have six shearers, but ten wool handlers. And there's a massive amount of passion and precision that has to go into getting the right wool in the right bins for the right brand partners.

Most of what we supply is contracted in long term contracts to the likes of Icebreaker and Sheep Inc, etc.

Those kinds of brands really want to know what it is you're doing in terms of emissions and animal health and everything else. So it's just an add on to that kind of thing.

We probably have a better relationship with our brand partners than with each other!

In North America, in Europe, which is, let's face it, where the money is. And increasingly in Asia, an awareness of greenhouse gases is huge over there. So they're reacting to that and they want us to react to that. And we don't have a problem with that. We get that completely.

But in terms of their commitment to the long term, we had a zoom call with one of our major brand partners in the early days of the COVID lockdown and the very first phrase from the guy was,‘we will honor our contracts’.

So because of our commitment to him and vice versa, our commodity price for that year actually didn't change at all. But that's because they can go out and tell a story based on things like our greenhouse gas emissions.

You know, we're selling the raw material or the product. We’re also selling the story that goes along with it. And that story has to be bang on the money.

You know, we can't be sort of making it up. They don't want anything to do with, you know, where you're fudging the figures. It's got to be really accurate. Because they're worried that if you were lying - which is dead right....If we get caught out, they get caught out.

So everybody's got to be absolutely confident that the other guy is telling the truth.

It's also important to know every farm's different.

So every farm needs to know their number. And what's working and what's not working. So that's always been our philosophy in whatever we do, that we have to do our own research. We have to do our own investment into our business. And that's pretty much what we we've always tried to do.

Yeah and the high country is such a tiny part of all of New Zealand's ag that where rules are put in place for everyone, well we're so off left-field of where everyone is that if we don't establish what's actually going on then we're going to get lumped in with everybody else for good or bad.

We strongly believe that we have to do more than just produce something and then put it at the front gate and hope that somebody will pay us a premium for it.

It's a big world out there and what the market wants, the market gets and if we're not supplying it, they’ll find it somewhere else.

When you go to big Asian capitals or big cities around the world, you know, people live their life online. So we're happy to provide imagery that they might aspire to, that they want to have a connection by virtue of the garment or the food they eat or whatever. That's going to be a huge change.

But maintaining those traditional values that we do now, I think will also be a big part of building that story and adding value to what we produce.

I think we don't say enough just how incredible New Zealand is as a country and how special it is and that we fail to recognize that at our own peril.

As farmers, we've got some things we need to tidy up on. Absolutely.

But it's not all bad and we should celebrate the fact that this is a pretty amazing place to live and bring your kids up. And you know, I don't think we do that often enough and I'd like to see a bit more of that.

Yeah, we host a lot of brand partners here, and they always are amazed at what we do and how we live and everything. And it does make you reflect a little bit on what you’re doing, and then, yeah...and then appreciate it as well.

We're really, really lucky. We're so lucky that we've got the genuine article here. The whole New Zealand is fantastically, clean and green, you know, compared to the rest of the world bar none.

So we've got an opportunity to make the most of that and to protect it so that we are actually getting paid more for it than the rest of the world.

Annabelle and Richard Subtil farm Omarama Station, a 12,000ha high country property in the Mackenzie Country. The property has been in Annabelle’s family since 1919 when it was purchased by her grandfather and great uncle.

One third of the farm is flat land and the rest hill country, ranging from 450m to 1,550m above sea level. The Subtils breed and finish merinos and beef cattle – currently carrying around 17,500 sheep and 350 cattle per annum. Around 40% of the farm’s income is from merino sheep meat, 30% from merino wool and 20% from the cattle. A homestay and hydro electricity generation provide additional income. 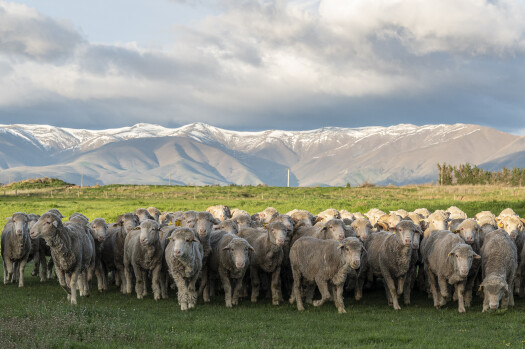 Average annual rainfall is low, at around 350mm on the flats and 500mm in the hills. Since 2008, 560ha of centre pivot irrigation has been developed, allowing an expansion of their operation into the fattening of bought-in store stock and the growing of speciality small seed crops for export.

Twenty-seven different soil types can be found across the property – a product of proximity to retreating glaciers. These soils are nutrient depleted and require careful management.

Connecting with the consumers of their products has always been important to the Subtils, who started supplying wool to Icebreaker more than 20 years ago. Looking after their animals, their unique high-country environment and their staff is key for the couple, who know how highly these things are valued in the markets they supply to. In recent years, climate change and agricultural greenhouse gas emissions have become another important consideration.

The extremes of climate and elevation and the challenging soil conditions means care must be paid to the way the farm is managed.

In 2015/16, the Subtils began developing a farm environment plan to guide management and decision-making. Over time, this has become a comprehensive resource, now encompassing:

Having such a detailed farm plan and accompanying data helps them demonstrate their environmental performance to regulators and enables them to access a premium price from their brand partners.

A farm environment plan (FEP) is a tool for identifying and managing on-farm environmental risks. It is unique to a property and recognises the local climate and soils, the type of farming operation and the goals and aspirations of the farmer and their family. It is maintained over time as a living document – evolving as risks and opportunities arise.

Farm plans can be developed with the help of an advisor, or you can have a go with this helpful resource developed by Beef + Lamb New Zealand.

As part of their thorough approach to environmental management, the Subtils have recently had an independent and detailed greenhouse gas assessment done by a specialist company. They also use OverseerFM to access a higher-level summary of their emissions.

The table below shows how this looked for Omarama Station in 2020:

*The weight of methane is shown here without conversion to carbon dioxide equivalence (CO2-e) because this is how it will be reported in any farm-level pricing mechanism.

These figures are fairly typical for a high-country farm, which an AgResearch study in 2020 found averages 0.7 tonnes CO2-e/ha per annum, with a range of 0.16-2.5 tonnes CO2-e/ha.

With their greenhouse gas numbers in hand and a comprehensive farm environment plan already in use, the Subtils are well-placed to address any regulatory requirements on climate change, as well as meeting the increasing demand from their brand partners for this information.

To find out more about the tools for estimating a farm’s greenhouse gas numbers, see our Know Your Numbers page.

Planting trees to offset emissions is not an option on a farm like Omarama Station. In terms of achieving reductions in the future, they’re continuing their focus on:

They're also keeping an eye on the development of new technologies that farmers might be able to employ in the future.

“Every farm is different,” says Annabelle. “It’s always been our philosophy to do our own research, to get the numbers for our farm and to identify what particular actions might work in our unique part of New Zealand.”

Know your numbers and have a plan

By the end of 2022, all farmers and growers will need to know their annual on-farm greenhouse gas emissions and by the end of 2024, they'll need to have a plan in place to manage them. These requirements are part of the He Waka Eke Noa partnership and are intended to help get farmers ready for agricultural greenhouse gas emissions to be priced from 2025. To find out more on how to do this, see our Know Your Numbers page.