Learn how Hugh Ritchie is approaching greenhouse gas emissions on his mixed arable and livestock farm.

I don’t think anybody would disagree with the ultimate aim, which is to reduce our carbon emissions. And I think that isn't going to change going forward.

I think we are all logical people and we try to do the best we can. I think if you try and look at it as a sort of massive, you know, zero outcome as your end goal, I think you can lose sight of the journey.

And so I think, you know, how do you eat an elephant? You know, it's a bit at a time. And so focus on one part of your business and start with that and make some gains there, and then you can move on to the next bit.

And if I've got a frustration, with the process at the moment, is that, we are all managing biological systems. You know, you can't just pull one lever and and nothing else changes. And so I think there isn't really a good understanding of that and what actually is being asked and expected of people to do to meet the challenge of a carbon zero in the future.

But I think equally it's wrong to then say, well, because of that we don't do anything

We're annually cropping about 880 hectares of intensive or annual crops.

On the grain side is maize, wheat, barley, oats. We do process vegetables, carrots, peas, sweetcorn and beans and we do some export squash along with some vegetable seed production and grass seed production. And then we finish lambs in the winter time on the cropping area

And on the pastoral block at Horonui is mainly medium to steep rolling hill country, that we run the beef unit on. Some lambs down there and the flats we’ll integrate with some cropping.

A thousand bulls or 1500 bulls and 7,500 lambs is going to be our biggest single item when it comes to carbon or greenhouse gas emissions.

Coming back to the cropping side, obviously fertiliser and chemistry is the next two big items. And the easiest one to control is fuel, which is effectively already part of the system.

We're actually doing a lot of work already to address some of our climate issues, but our focus hasn't been on carbon. It's actually been around effectively and efficiently growing crops in a sustainable way.

You know, if I go back to when I was at school, I spent a lot of time working, driving tractors which was great, helping out and everything else. But it was very noticeable that over time our soil was actually getting harder and harder to get to a position that was deemed good enough to drill a crop.

And so getting the knowledge from Massey on soil science around structure and how that all works and what that can mean for our productive systems, that was probably one of my first focuses, as was how do we actually reduce the damage to the soil?

Reducing our tillage has been a major thing, moving to direct drilling strip tillage. Rotation has also been a big part of the farm for 60 years. So again, that enables us to lessen the amount of fertiliser we're using for some crops, how we structure that rotation so that legumes feed the wheat as an example.

Certainly compaction is another big area we look at. So, running tracked equipment for a lot of the work we do so we don't compact the soil or using aeration to reduce or alleviate that compaction. We don't have cattle on the cropping areas.

We irrigate a lot and so all bar one machine, has got variable rate irrigation. So that enables us to put the water in the right place on the right soil types and not have any nutrient flushing effects going on and enables us to effectively use utilise the water.

The GPS equipment on the machines allows us to be very accurate with what we're doing. So overlaps, so lack of fuel. And again coming back to the strip tillage and the reduced tillage means that our fuel load per hectare is a lot lower than it has been in the past.

We integrate livestock in the business as well, which gives us nutrient cycling and again helps with that getting crop residue and stover back into the ground so that we get that organic matter carbon build up in the soils, which is quite critical.

Being on the east coast with the dry, we've found that breeding and that sort of high maintenance cost of carrying stock through for for a limited output was was not the right way to do it. So we're purely finishing, so we can get things in grow them quickly, get them off the paddocks and gone. So I think that's quite an effective way of utilising the country, and managing our feed supply so we're not bringing in supplementary feed to keep capital stock over the summer. We can actually basically use seasonal supply to meet demand of our system.

To do nothing is not an option.

But if you think about it, just go back to efficiency. No farmer would argue about being efficient, whether it's with the amount of fuel he uses or chemistry he uses, or the amount of land he uses to get a certain outcome.

So if you focus on efficiency and just changing things to get it more efficient, then you're probably going to be going a long way to making gains around what your carbon losses are.

So look at that as a positive and move forward.

Hugh and Sharon Ritchie own Drumpeel Farms – a mixed cropping and drystock operation that spans two separate blocks in central Hawke’s Bay, totalling just over 2,000 ha. The farm has been in the family since the early 1960s. 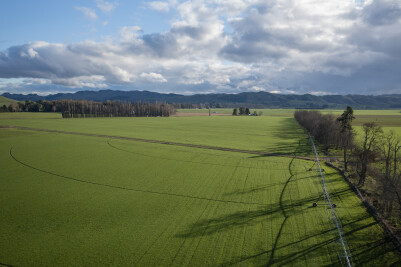 The main cropping area is the Drumpeel block – 640 hectares of flat country near Ōtane comprising peat, silt and sandy soils. Hugh grows a variety of crops on this block – wheat, maize, barley, oats, carrots, peas, sweetcorn, beans, export squash – and some specialist grass and vegetable seed production. Around 7,000-10,000 lambs are finished on the cropping area each winter, grazing Italian short-rotation grasses that are sown over the top of the old crops.

The area is summer dry and gets around 800-850mm average annual rainfall – although the distribution of this throughout the year is changing.  Irrigation was introduced in the mid-1990s, supplied from an on-site bore.

The Ritchies also farm a 1,200ha pastoral block at Horonui, closer to Hastings. This is medium to steep rolling hill country, which supports a 1,500-strong bull beef finishing unit, a small cropping area on the flats and more lamb finishing.

Hugh has long been focused on the environment – seeing its health, particularly the soil, as integral to the success of his farming business. He takes great care to look after this vital resource, minimising damage from tillage, avoiding soil compaction, using variable rate irrigation and precision agriculture technologies, and integrating livestock.

Although he is worried about the increasing pressure on farmers in terms of regulation, he is pragmatic that they have to get on with it.

“To do nothing is not an option,” says Hugh. “It’s easy to feel overwhelmed, but you don’t eat an elephant in one go. You have to break it down into manageable chunks. Focus on one part of your business, make some gains there and move onto the next part.”

For Hugh, this has been about efficiency – getting the different components of his complex enterprise working productively as possible, all the while staying within the natural limits of the environment and minimising inputs such as fertiliser.

It is also about being flexible and staying connected with others. Hugh values his involvement in local farming groups, with industry organisations and others like the regional council – seeing these as important sources of information and places to test his thinking and hear what others are doing.

“Being willing to try new ideas and to learn from others has been key in us getting to where we are now,” he says. “Managing a biological system is hard, and farming is only going to get more complex and technical. Working alongside others can make it feel less daunting.”

In the next few years, New Zealand farmers and growers will have to know their agricultural greenhouse gas numbers and have a written plan for reducing them. Hugh is starting to get his head around what his numbers are, what drives emissions in his farm system, what he might be able to do to reduce them and the trade-offs.

A number of tools are available for farmers to find out their greenhouse gas numbers. Because of the complexity of Hugh’s system, he used a combination of OverseerFM and Beef + Lamb New Zealand’s greenhouse gas calculator. You can read about these and other tools on our Know your numbers page.

*The weight of methane is shown here without conversion to CO2-e because this is how it would be required to be reported in any farm-level pricing mechanism.

The main drivers of agricultural greenhouse gas emissions (methane and nitrous oxide) are: 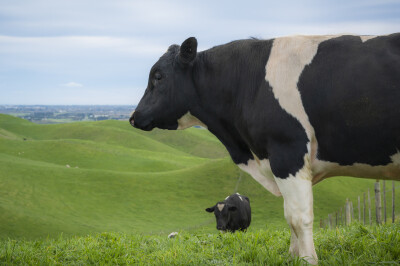 For Hugh, his emissions are driven by the sheep and cattle he farms and the nitrogen fertiliser he applies. Now that he has his numbers together, he is well placed to start developing a plan to manage them.

Hugh is already doing a lot for the environment, in particular to support healthy soil structures and microbes and to improve the productivity of his crops and livestock.

Many of these actions also have a positive impact in terms of greenhouse gas emissions, including:

Find out more about these kinds of practices on our on-farm actions page.

Adapting to a changing climate

As well as starting to address his greenhouse gas emissions, Hugh is aware of the need to adapt to a changing climate.

The East Coast of the North Island is expected to warm by about 1°C by mid-century and more than 2°C by late century. Scenarios suggest that there will be an increase in very dry conditions and more hot days (over 25°C), with some seasonal reduction in rainfall in winter and spring. There are likely to be fewer frosts and an increase in extreme wind speeds and intensity of ex-tropical cyclones.

Availability of water is already an issue for arable and vegetable cropping in the area – something Hugh knows will continue to worsen in the future. He has optimised his irrigation technology to achieve efficient water use and focuses carefully on management and scheduling. Extensive use of soil moisture monitoring services allows Hugh to track and predict crop water status accurately. This gives him the confidence to avoid unnecessary irrigation while obtaining maximum yields. Careful crop rotation design and selecting crops with different planting and maturity dates reduces competition for limited irrigation capacity.

Healthy, well-structured soil has higher infiltration capacity, better internal drainage and minimum limitations to root growth. Hugh’s focus on maintaining healthy soils is key in capturing the limited summer rains. This helps his farm cope with extreme rain events when they do happen.

Know your numbers and have a plan

By the end of 2022, all farmers and growers will need to know their annual on-farm greenhouse gas emissions and by the end of 2024, they'll need to have a plan in place to manage them. These requirements are part of the He Waka Eke Noa partnership and are intended to help get farmers ready for agricultural greenhouse gas emissions to be priced from 2025. To find out more on how to do this, see our Know Your Numbers page.